Working the weekends for almost two decades made me unaware of how a real weekend felt like. Now that I just passed a major personal turning point in my life, and my short-lived marriage has been finally adjudged, it was time for me to move on and to live in peace; hopefully, so has she. After all this crazy, whirlwind romance ending in absolute separation, I believe I should deserve a much needed break from stressful living from work, and discover, at least, what a weekend had offered. During the course of this sojourn â€˜livingâ€™, I was able to catch-up with friends and family living at both ends of the city.

So this is how a weekend feels like, and it is so darn relaxing! Life is so good after all. Itâ€™s a totally different enjoyment from what I was used to. My butt is now almost always stuck on the dining /office table seat never wanting to leave (I live in a small, dingy apartment). Anyway, Iâ€™m deviating from what I was supposed to write about, but the feel of a real weekend started this dish.

Another factor that helped me discover this dish was the decision to reduce my cable channels down to about 40. I had thought it over the holidays that I didnâ€™t need 60 or so channels just to be in touch. I already had Wifi and the TV was just, generally for daily news and current affairs. I also had to be abreast just in case some beautiful, charming woman comes knocking on my doorstep and steps into my domain, the TV and the couch are there for her while I cook and set the dining/office table for a quiet, romantic dinner. You would understand where Iâ€™m getting at.

During this period of relative peace, I discovered some other better channels besides the usual Food Network. Well, the Food Network was becoming to be too boring, and I needed another shot in the arm to wake my senses and palate up. This led me to watch TLN, a Spanish language channel dedicated, of course, to the Mediterranean lifestyle, and it was just totally astonishing and refreshing!

On one of their episodes about Mexico, the traveling network Chef introduced the Pozole or Mexican Stew with Hominy. This dish is so versatile and so infused with Mexican identity and culture that I had to try it myself. I was hooked afterwards, and prepared it a couple of times when my body needed something nourishing and comforting. It is not exactly meticulous to make and ingredients are readily available in many grocery store shelves. This is Mexicoâ€™s answer to the Filipinoâ€™sâ€˜Nilaga,â€™â€™Tinola,â€™ and even â€˜Pochero,â€™I think, and a whole lot more. Itâ€™s a one pot wonder of virginal proportions. 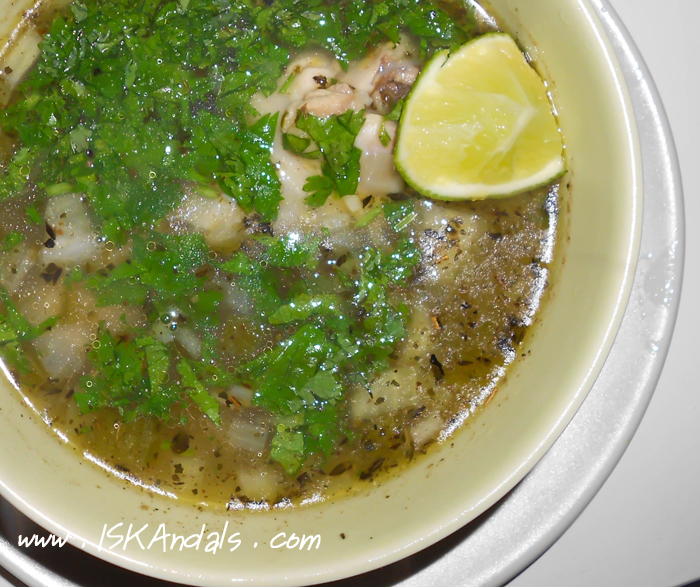 5.0 from 1 reviews
Pozole
Author: Erwin
Serves: 4
Ingredients
Instructions
Notes
Optional Table Sauces: Lizano,Toyo, Olive Oil MGA PAALALA: â€¢ This dish is hot! If you want to control the heat, remove the pits from the chilis before dicing. For this Pozole, I combined Jalapeno & Habonero Chilis. â€¢ I used 2 Chicken Quarter Legs instead of the usual pork butt as in classical Pozole. Unlike chicken, pork requires longer braising period. â€¢ Pull the chicken legs out when cooked and reduce the broth some more to increase intensity. I also pre-boiled the chicken and discarded some chicken skin fat for health reasons. â€¢ Diced, pitted plum tomatoes will further refresh this dish up together with Cilantro and Lime. Didnâ€™t have any available when I made this batch, and didnâ€™t want to buy one under extreme cold weather conditions, but itâ€™s a perfect match as with beer. The ripe, red colour of the tomatoes will complete the Mexican flag.
2.2 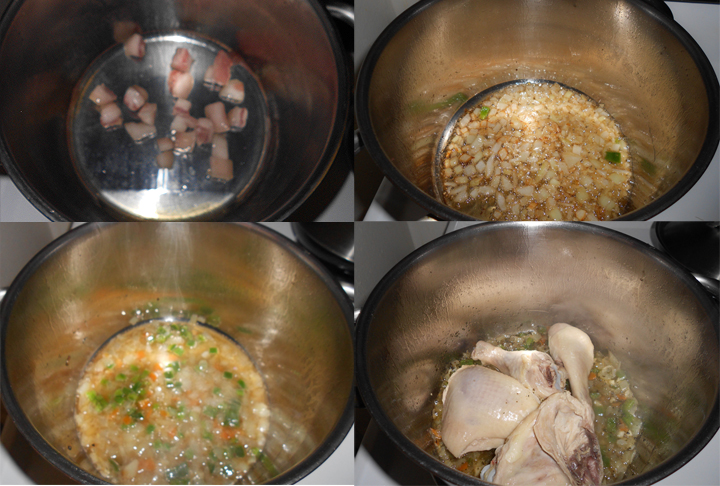 This dish is perfect for a slow Sunday morning shared with a special someone, or as a hangover treat after a night of drinking. Many, many more substitutes can be done. I also discovered while shopping that there were yellow hominies available in the market; this slight change can alter the taste of the entire broth. Dried hominies are also available in many Mexican specialty stores, but that would require soaking overnight. Dried herbs can also be substituted with fresh ones or both can be used to increase the layers of flavourings to the broth. To make it really intensely flavourful, a blend of Olive Oil, Cilantro and roasted Tomatoes, Limes, Dried Mexican Chilis, Bell Peppers, Jalapenos as a side can make the meat stand out. This is extra though and requires more work, and an extra day of preparation is absolutely required. I will get to making Mexican Sauces (Salsa)later on.

Today is Sunday, and I opted to stay at home instead of usually visiting my friends. I needed a break from road travel, and the weather is cold and wild outside for the first time after almost a month of waiting for Old Man Winter. Might as well chill. Itâ€™s so quiet now, and I am cherishing every moment this day can offer. By March or April, I am sure Iâ€™d be killing myself again working and running like a headless chicken, frying, flipping and grilling all at the same time. Well, who said this would last longer than expected, but Iâ€™m not complaining despite some temporary financial short-fall. Life is meant to be shared.