My Dad cooked and ate a countless number of fish stews almost every night for dinner. I think each night had a variation from the previous night. He grew up in Ilocos Norte and I am guessing fish was a major staple in that province. Iâ€™ve only gone there, I think, just about twice in my life and the only vendor food that I truly adored and that had stuck up and stayed in my head was the Bagnet. That was something I would go as far north of Manila, if I were still living there, just to taste that mouth-watering, deep-fried pork butt or â€˜kasimâ€™ over beer. I was lucky to find a small non-chalant restaurant just near my ex-wifeâ€™s apartment, and while I was in Manila, became a regular visitor of that joint. Bagnet is not Lechon Kawali; if Iâ€™d compare one with another. It has a much better smell and condiment and it is not as fatty. Anyway, Iâ€™ll talk about Bagnet some other time when I come up with a classical pinoy dish much related to it. I was originally just thinking about fish itself and making a fish stew.

Going back, I tasted my Dadâ€™s locally concocted fish stews a few times and unfortunately, didnâ€™t like them at all. It must have been an acquired taste (like Iskaâ€™s Chicken Liver); when he was growing up in the province and was stricken with poverty, and the plants and local herbs that abundantly surrounded the province in my Dadâ€™s early childhood added something peculiar to the overall taste of his meals and particularly to his fish stews.

While growing up, I basically just had Sinigang na Bangus as my fish stew; if it werenâ€™t another night of Fried Tilapia or Bangus. I just hated picking through Bangusâ€™ tiny and sharp bones (tinik), and still feel hungry after chewing on its very light meat. That was all the kinds of fish the entirely family had every time. Of course, shrimps and crabs were there once in a while, but I was allergic to them and really had not much of a choice. Chinese Steamed Fish was a major treat for me at that time.

Iâ€™ve been trying to eat fish lately and have been searching for a more affordable means and ways to do so without breaking my bank. As my grocer continued its renovations, more fresh frozen items continued to pour in during my every visit. When I was looking around, I discovered some fresh frozen Tilapia & Calamares which I really couldnâ€™t resist. I took a bag of each item; knowing they would last me a week or two to consume. 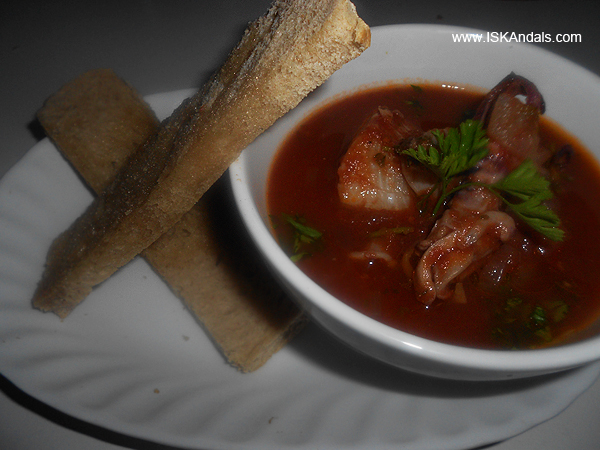 Iâ€™ve also been stung by Italian Pasta Dishes and Recipes lately, and this is with no exception. I know this is also a Classic Italian American Dish and when I first saw and read about the recipe, I just couldnâ€™t resist, but making something of my own creation. Itâ€™s a very light and hearty dish; perfect for a cold winter and definitely perfect with wine. Even though I didnâ€™t have the complete ingredients, I proceeded; knowing the taste would still be as spectacular. I enjoy freestyle cooking and it does help just working with I have in my fridge to bring out the spirit of a certain recipe.

Blend the canned tomatoes using an immersion blender and reduce by a third in a sauce pan. Adjust the consistency with stock if required.

Start mincing and dicing some garlic and onions, and chop some Parsley and Thyme. Set aside. 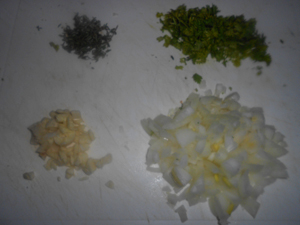 Heat a sautÃ© pan and start sweating the onions and garlic. Deglaze with Red Wine, add the Tomato Sauce followed by the herbs. Let the pot simmer for a few more minutes. Season to taste. 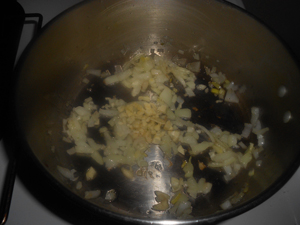 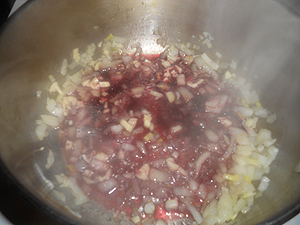 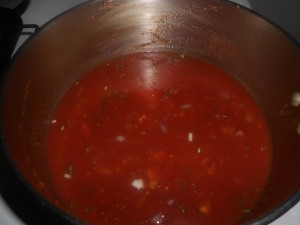 Cut the Squid in rings and the fish fillets in big chunks. Add the Squid first and let it cook for about ten to fifteen minutes at low-medium heat. Check occasionally and when the squid is tender, add the fillets into the pan. Let it simmer for another five to ten minutes at low until the fish is nearly done. Adjust the seasonings accordingly. 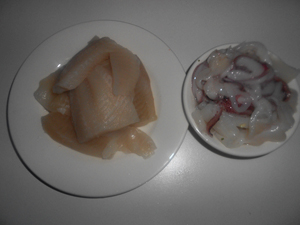 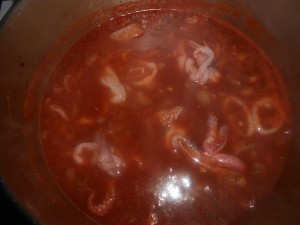 Add more fresh chopped Thyme and Parsley as it cooks further. Squeeze some lemon juice and drizzle with olive oil before serving. 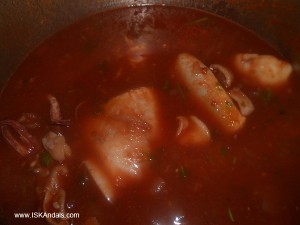 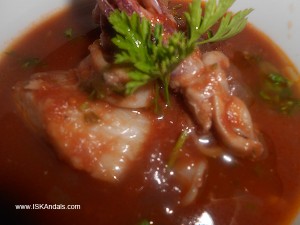 This dish is very versatile. I adjusted the ingredients to my liking due to my allergies and time limitations, but there is more seafood involved with this dish like: Clams, Cod (or any other white fish), Shrimps (peeled & deveined), Lobsterâ€™s Tails & Crabâ€™s Legs and Scallops. Itâ€™s really totally up to whatâ€™s available in the market; budget and what else can be thrown into the pot. Fish stock and clam juice will also make it more flavourful and fuller. Itâ€™s really all according to preference.

I would have sauted Carrots and Celery with the onions and garlic, however, I wanted to keep it more straightforward and simpler. I could have also adjusted the Tomato Sauce in the beginning since that was the base of the stew, but my time was very limited to create something a little more extraordinary. Additional herbs can also be thrown in for that extra aromatic punch like Basil. Thyme, Parsley and a squeeze of lemon are already a perfect match as it is. 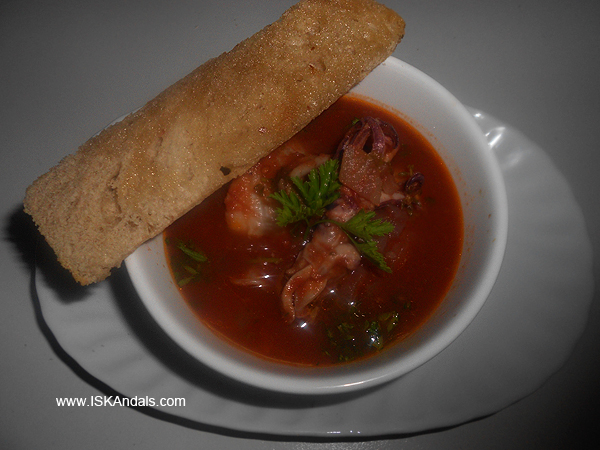 I had some toasted bread (not exactly Italian) on the side to dip it in the broth. Of course, I drank my evening away with the leftover Red after a very long week at work.