The past workweek was tremendously busy and furious. The kitchen constantly served catering events and group reservations, and at nearly the same labour hours and with more workload at hand, each and everyone in the brigade was pushed and stretched beyond their physical demands. However, this does not occur as often as usual. It’s Christmas again and with all the get-togethers, reunions and parties spotted in the city, it is by far normal to be frenetic, frantic and to what they call here “stupidly crazy” in the hospitality and food service businesses.

It’s indeed that time of the year again when get-togethers amongst close friends; family, compatriots and even ex-lovers tend to happen. The air just changes instantly and for whatever reason, the troubled society and the warring nations somewhat pause to a standstill, becoming warmer and comforting to strangers and a bit generous to street urchins and beggars. This must be the magic of Christmas, the magic brought forth by coming of the ‘One.’ In a couple weeks, this magical mystery tour in what my ‘brother’ coined as a hostile environment will end. Everyone does not want this moment to disappear, I suppose. It’s such a joyful occasion. Who doesn’t want infinite bliss?

Living in a busy and desolate concrete jungle makes me somewhat emotional and sentimental sometimes. It’s only this season that my emotions flare and by far mine is already torched. This is one of the quietest seasons I have celebrated (what celebration?) and for whatever reason; any social gathering or connection to anyone is precious and dear. Almost everyone I have met or bumped into has had plans to be away from the city, away from societal misdemeanours. It’s such time, again, just brilliantly fantastic! And I’m here stuck battling an apartheid of mixed emotional tundra. 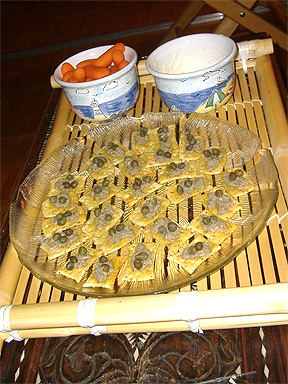 In one of those solemn and quiet moments after work, I did feel some real Christmas spirit in the air. On the 14rth of December, Maripi and I planned and hosted a dinner for friends to celebrate this once a year forthcoming. Knowing that almost everyone would be away for the holidays or maybe would be on somebody else’s lap and arms, this gathering would have been the last one for the year, a last hurrah of sorts. Just as what Christmas may have exemplified over and over here and around the globe, it was a joyful hosting of food, wine and good and meaningful conversation.

Maripi had prepared the aperitivo and insalata while I took care of the entree. The aperitivo Maripi concocted was a canape of crackers, dulong and capers. It matched the Sherry and white wines brought by guests. The dulong, which was bottled and preserved in a brine of olive oil and seasonings, made a spiritual and traditional homecoming of a Filipino fish, making the start even more nostalgic. Unfortunately, I had to skip the insalata. It was topped with surimi, making my palate up and arms, and my tummy flipping in despair if I had taken it. 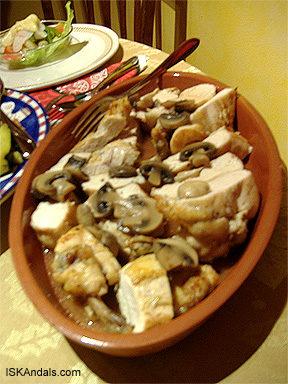 I have never in my life cooked for a group and this became some sort of a challenge. I’ve cooked for two a year before that just to test what I have learned in CulinarySchool, but never for five and I only had two hours to finish everything. I knocked my system out and began the challenge. I prepared the following: Stuffed Chicken Legs in Sherry Reduction, Boneless Chicken Breast in Mushroom Sauce, Roasted Zucchini, and Rice with Tomatoes and Beans. From the way the dinner went, the Stuffed Chicken Legs took a perfect score of ten. The group loved it! And I of course was in LALA land. This goes to prove that being patient in prep work does wonders to food. It took me about an hour to de-bone and stuff 4 Chicken Quarter Legs and another half hour to cook the sauce. I have learned a lesson in this undertaking that I will carry with me for a lifetime. Based on this dish, I have concluded that being patient on something or to someone could be rewarding, I reckon this conclusion goes well too in winning a woman’s heart. I have some more miles to go. 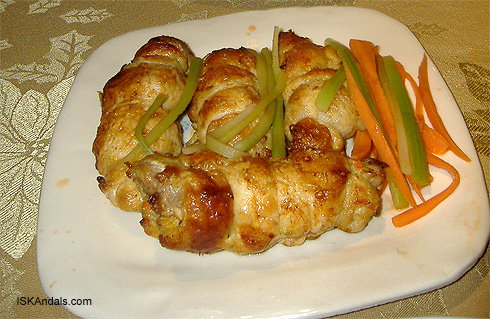 However, in my personal opinion, I enjoyed cooking the vegetables. It was cooked ‘freestyle.’ My plan for that dish had shortcomings so I had to improvise somewhat. I just added whatever I’ve had that evening and threw them one at a time into the roasting pan. I proceeded with caution and applied another cooking method. Time really wasn’t working with me, it never have worked with me. I guess I have surpassed myself again and my credibility. That’s the reward of cooking for people and guests. I believe many chefs have that feeling everyday, making the job a total art form, not a tedious assignment and undertaking. 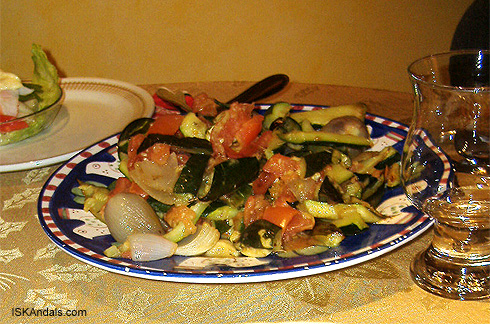 It’s now 8:52 AM, the morning of the 22nd of December. The city streets are very calm and eerily quiet. I feel everybody has already taken his or her two-weeklong holiday vacation.I woke up at 7:00 AM and looked outside my window. The corners streets were wet and looked slippery. It did not appear to be Christmas. Based on the weather forecast, Toronto won’t be celebrating a “White Christmas.” That’s a big sign of relief. The weather has a factoring effect to the overall mood of the occasion. This made me feel a bit sadly better.

I’m now in my apartment, celebrating my day-off and listening to a very heart-wrenching French acid jazz mix I hardly understand. The weather, the timing of my day-off, the occasion, and the song have moth balled into a very relaxing atmosphere. I have longed for this monumental intercourse of peace and serenity. During this ‘festive’ period, I have also realized that a ‘star’ in my life is being missed. This ‘star’ is yet to be identified; yet to be known and determined. After years of emotional and professional upheaval, I reckon I have located this ‘star.’

Shooting stars don’t appear every evening, every night before I dive down to my bed for a deep slumber. They just appear up in the sky. It’s a phenomenon. I’ve seen that ‘star’ and I hope that ‘star’ saw me too. This ‘star’ majestically glows and from the way it glowed, I could tell this ‘star’ could be the one.

Can’t wait for this season to end.

One thought on “Rouge Et Blanc”