Sisig. Itâ€™s the penumbra and epicenter of the Filipinoâ€™s secret love affair with the pig and its heavily greasy aftermath. Itâ€™s like an annoying love song that constantly repeats itself in many taverns across the city and through the decades has been dignified, glorified, persecuted and praised for its gastronomic identity. It has mutated into an unidentifiable immortal thing; topped with egg, slathered with Mayo, rubbed with liver pate and many other countless and sometimes eerie ways, that eating it at first bite seems like an eternity of bliss or for some, an eternal damnation to death. Itâ€™s that sacred. Itâ€™s that dynamic. Itâ€™s Sisig, and I like it. What more can you ask for?

Sisig is Filipino, and itâ€™s definitely Pinoy to the core. Itâ€™s the Pinoyâ€™s imaginative and resourceful way of recycling and stretching whatâ€™s left of the pigâ€™s carcass or any broth based stew, and at the same time dealing with the beerâ€™s constant partner. Thatâ€™s a common denominator for all beer-guzzling fellows out there; an undying partnership, of love thrust into an unholy matrimony (with the annoying love song background). Thus, with Sisig, the love affair becomes more of a threesome of gastronomic and epical stand-off. Itâ€™s not only sacred, but lethal and ferocious within, atop and beyond. Eat it with rice or by itself and the dayâ€™s over. I like Sisig.

Sisig became really popular during my university years. I clearly recall having Sisig with about two cups of rice for lunch just across Taft Avenue for as little as Php 20.00. It was in the mid to late eighties when Taft was not yet invaded by commercial plazas and popular fastfood chains. Back then, the surrounding areas was a row of dark and untrustworthy Cantinas and Tavernas serving cheap and delicious lunch and beer to struggling and highly energized university students. Sadly, progress took over, and those Cantinas that resembled Tapas Bars vanished. It was one way of killing time besides chatting at the study hall about school assignments, extremely beautiful and seductively revealing women along the university corridors, and worthless projects to add-on to the final grade. Usually, a Sizzling Sisig plate served with a couple of cups of rice lasted the entire afternoon sessions and lectures and would tide me up through the late evening classes. I could still remember the smell of the sizzling plate clinging to my clothes. Something smelly and as abrasive like that can really never be set aside or forgotten. Others knew exactly where I was when I stepped in the dark, hot and humid air conditioned classroom where brewing body odor and stench lingered almost all day. Itâ€™s definitely personal history worth recalling and retelling; a phenomenal history.

Iâ€™ve had my share of making Sisig. I recycled a Pork Broth to a menacing Sisig two years ago and was very happy with the result. My pot-au-peu was nearing its fourth and final day and something had to be done. Sisig was the only alternative. I chopped the Pork into minuscule pieces, dredged it in cornstarch, and went away making the recipe as how I recalled tasting it. I discovered the perfect blend to a â€˜Sisig,â€™ and I felt after that no matter what kind of meat was in the â€˜Sisig,â€™ it really wouldnâ€™t matter as much. Itâ€™s the texture and the crunch that makes the Sisig stand-out; and that taste has a somewhat universal appeal to many Filipinos. Itâ€™s amassed with spices and sauces that the meat disintegrates in the cooking and serving process and melts in the mouth on the first bite. That has been my rule of thumb. 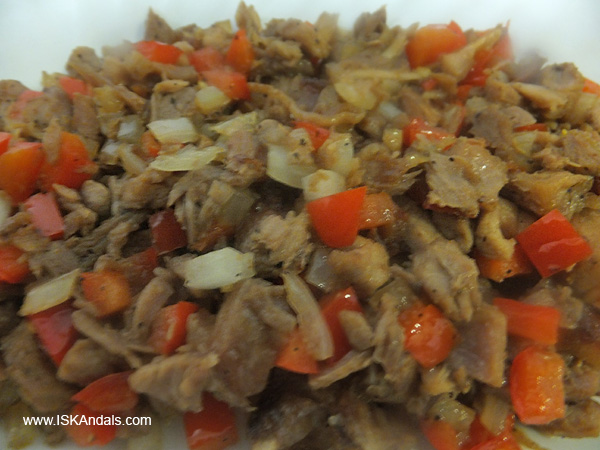 For this challenge, I went for the Turkey Drumsticks as the main Sisig ingredient. It was a cheap cut of about a dollar each and I knew it was the best contender for a â€˜Sisigâ€™ make-over. If North Americans turn their Turkeys into sandwiches after Thanksgiving, Iâ€™d turn mine into this mind-blowing dish. I was happy. I was not frustrated. I like Sisig.

Heat up the brine and let it stand to cool. Brine the Turkey drumsticks overnight and wipe dry. Roast the drumsticks in a 325â€™C pre-heated oven until golden. Set aside to rest. 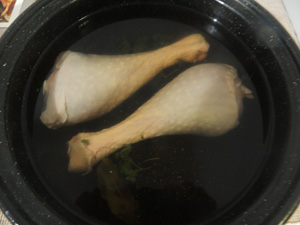 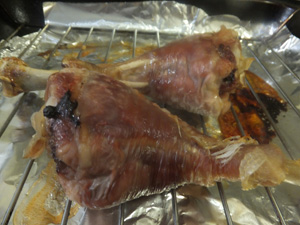 Remove the meat from the bone and chop into small bite size pieces. Do the same for the smoked bacon and lean pork. Start dicing the red bell pepper and Spanish onions.

Pan-fry the bacon until crunchy followed by the lean pork. Move both on one side of the pan or set aside and sweat the onion and red bell pepper on the same pan. Set the stovetop to mid-high heat and add the minced Turkey. Add the brown sugar, ground black pepper, lemon and lime juice, Filipino soy sauce, Patis and dowse with the Knorr Original seasoning. Season to taste and let it simmer for a few more minutes. Set it on a plate or a sizzling plate with an egg. Serve with a slice of lime or lemon. 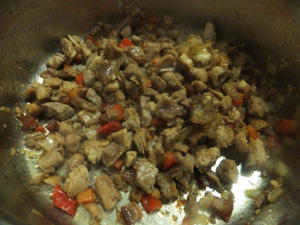 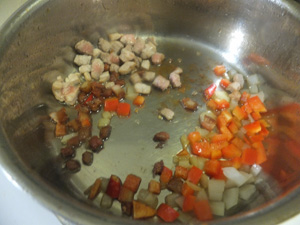 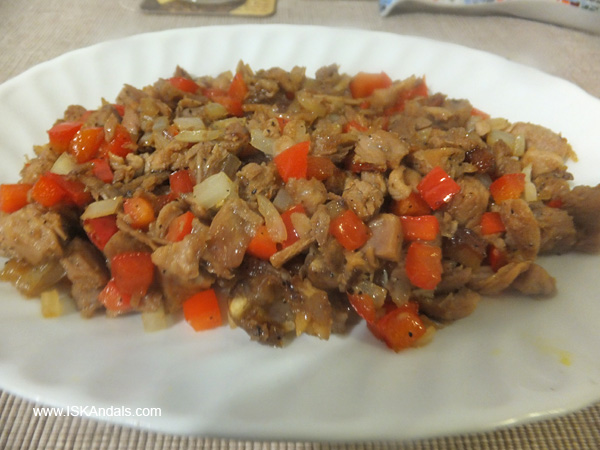 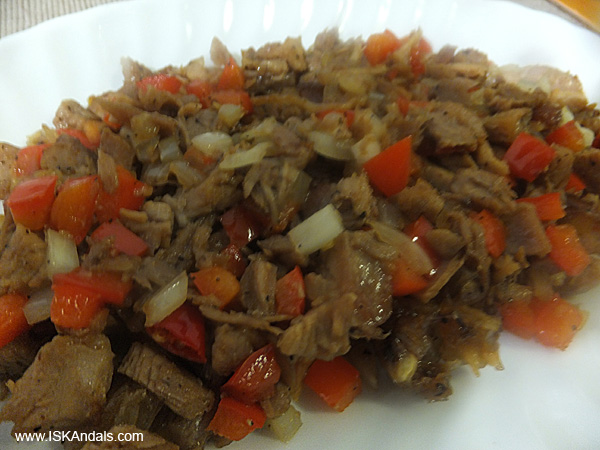 This month’s theme “Sisig” is hosted by Jenn of Storm In My Kitchen and Iska of ISKAndals.com.