I could not sleep. My adrenaline from today’s rush shot up to the roof, and I couldn’t seem to shake it off. Today was unexpectedly bad! My agency asked me to cover a kitchen with no ‘Chef’ in charge just after a long weekend, and I smelled trouble. It was a holiday Monday yesterday, and I expected to breeze through today; also after working a gruelingly and agonizingly long Monday before that at my other job. Nevertheless, I was forthright with my intention of keeping this Agency as extra source of income during long, lean winter months, and responding at the right moment at the most unexpected of times like this morning was another ace in my pocket, so to speak. I kept my word and clocked-in at a very short notice.

The kitchen was a disaster when I arrived. There were basically nothing nearly done and service at the cafeteria was just about an hour or so away. I had to ‘wing’ everything and disregard the day’s menu just to make it happen. I just told the supervisor that I will do whatever was needed done, but I could not make decisions with regard to menu changes. Luckily, the operations manager stepped in just in time to complete everything else. I had basically made the starters and sides during that short period of time. It was up to him to decide on the mains, which, as a short order cook, was off my hand, but manageable otherwise. The day nevertheless ended smoothly as another two hours passed by. I had never worked in a kitchen as disorganized as this one; with almost all cooks calling in sick or late after a long weekend.

On my way home, I went to the liquor store and bought a bottle of Baltika 7 Premium 500ml in the absence Heineken. I needed something to calm my nerves down, and this, I said, would definitely work; anything just to finish this day right. While cleaning up and relaxing, an idea came to mind of another dish, which if I recalled; I only made once, but never had a chance to do it again. This particular dish was ‘Sancocho’. I had sort of missed it, and thought of sharing it on-line. This was the dish I had wished and relished I had a big bowl now, pronto, to comfort me during one of those long, tiring days like today. This dish as usual is also best served with alcohol on a steamy, Sunday afternoon with family and friends. It’s a very filling and satisfying dish and was created with an intention of serving an entire population during a fiesta or big family gathering. It’s one of those one pot wonders which can never fail to amaze or please a group of guest, including unwanted ones.

Sancocho came from the Spanish verb ‘Sancochor’ or ‘to parboil’. There are several variations of ‘Sancocho’ stemming from different South American Countries, but it’s considered as Dominican Republic’s National Dish; their answer to our adobo. The preparation is very long and tedious with about three to four root vegetables and about two to three kinds of meat concocted all in one pot. This dish is very similar to the Filipinos’ ‘Pochero’, ‘Afritadang Manok’ and ‘Kalderetang Baka’ combined as ONE powerful dish without the use of tomato sauce. 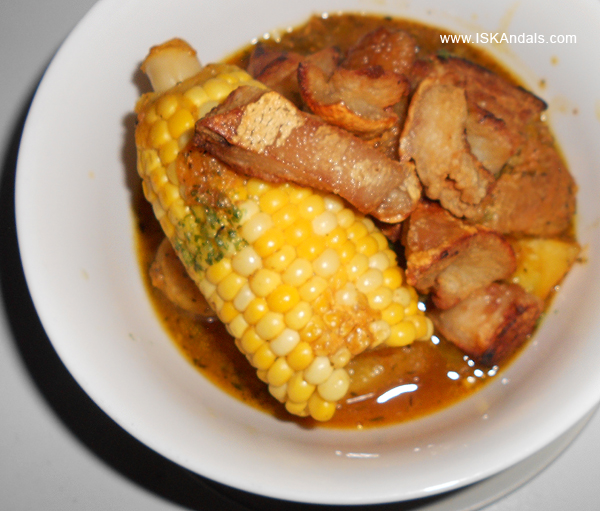 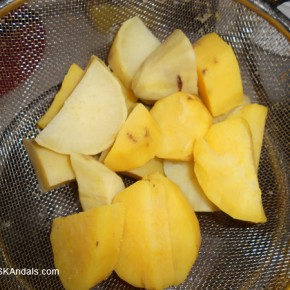 2. In a Dutch oven or a large pot, sauté the onion, garlic and green bell peppers (or sofrito) until aromatic. Add the beef first, mixing it until brown; followed by the pork cuts. Add some stock and cover until they are about ¾ done. Add the chicken quarters thereafter and continue braising, covered. Add more stock if necessary, and season some more with dried oregano and cumin. Add a sachet of Sofrito base to enhance the taste of the broth. Season to taste. 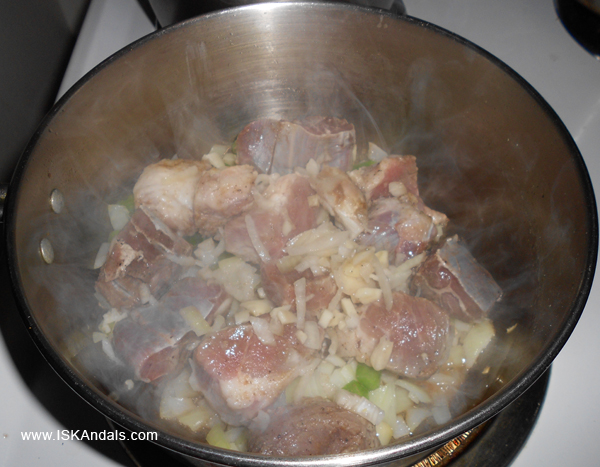 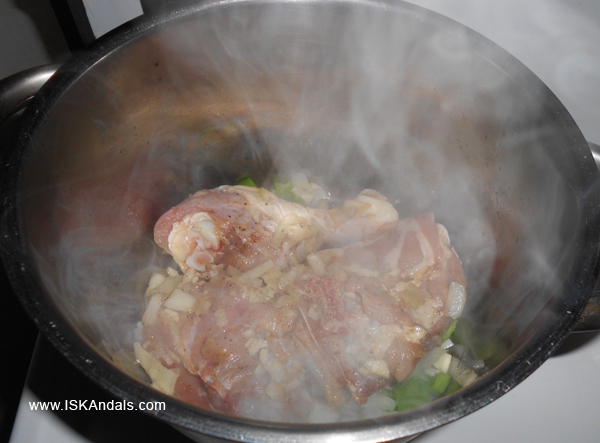 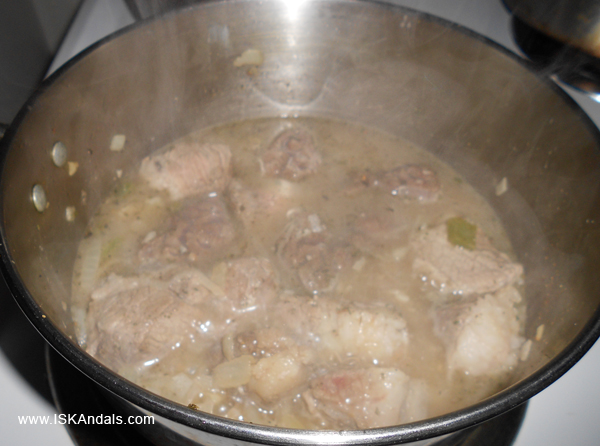 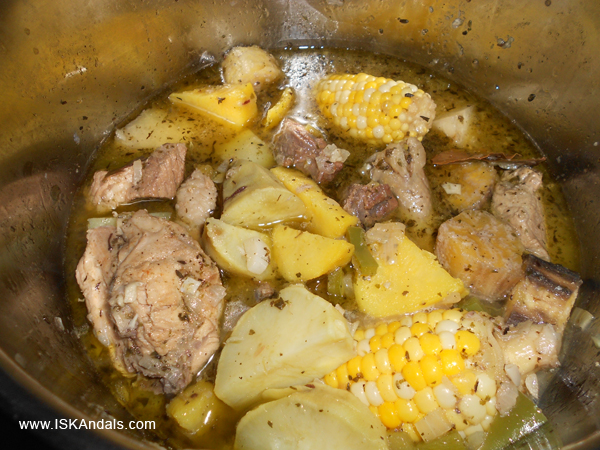 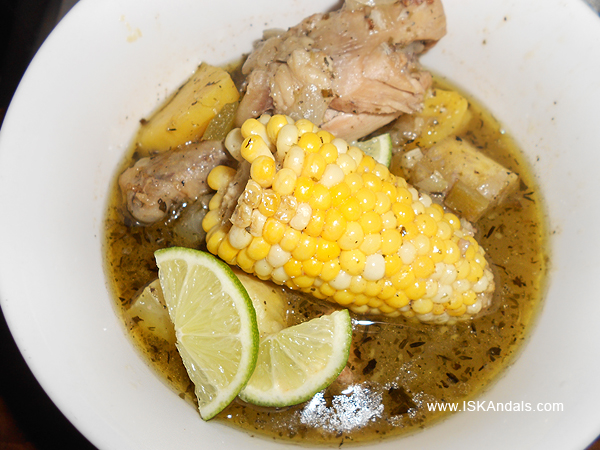 Indeed, preparing ‘Sancocho’ would require a battalion of cooks. To serve a town, a kitchen brigade is required to assemble the pot, with work subdivided within the clan. One will be in charge of butchering and marinating the meat, while another group will do ‘mise-en-place,’of peeling and cutting a myriad of root vegetables and ‘Sofrito’. The host, on the other hand, would orchestrate the preparation of the pot itself.

This kind of camaraderie is best displayed in the Filipinos’ celebration of the ‘fiesta,’ and a whole day’s work would definitely be needed to complete a line-up of dishes besides just one. The volume of work is just that massive, thus making it so dearly special.

Working at it alone and with the thought of speeding up the entire cooking process, I had two pots going right away; one for the marinated pork and beef and another for the marinated chicken. I cranked my stovetop to high, sauted my ‘Sofrito,’ and added the meat on each. As they turned brown, I added the chicken stock and left them to braise for about half an hour or so. But before starting with the browning of the meat, I pre-boiled my root vegetables namely: the Yukon Gold and Sweet Potatoes, and the Yuca, while I soaked the Green Plantain, Jicama, and Corn on the Cob in cold water to be added later. 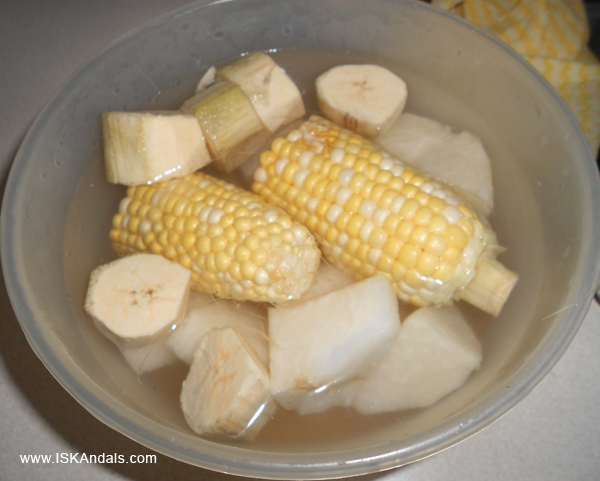 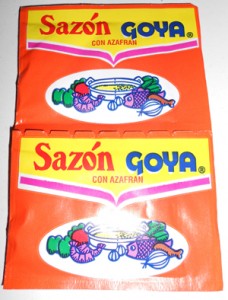 I omitted the ‘Longganiza’ having had enough meat portions in the pot to feed myself for at least three days. I also decided not to follow the classical process of preparing ‘Sancocho’ to speed up the entire cooking method. With this batch, I used the minimum amount of root vegetables and still came up with a huge pot for myself. My ‘Sofrito’ mainly consisted of minced garlic, onions, and green peppers. A classical ‘Sofrito’ would call for celery instead of garlic. The big pot I made is my mother pot, and if in case I decide to change or enhance the flavour further, I could opt to add a sachet of ‘Sazon’ in a sauce pan.