This beautiful entry is written by Erwin Ines for Lasang Pinoy 22 – Rice to the Challenge hosted by Cooked from the Heart. Blogging from Toronto, Canada, this is Erwin’s 3rd time to join Lasang Pinoy. Read his other articles listed here.

Outside is totally white and blustery. Toronto is experiencing one hell of a storm today; the worst after nearly sixty years as the radio announced very early this morning. Unfortunately, today is a Sunday, and I’m scheduled to work, and I did. I worked for 3.5 hours from my usual 8 or 9; being cut off as customers slowly trickled into the restaurant. I expected to be cut. I volunteered to be cut. I anticipated it, but the idea of working 7 days a week for the next 3 weeks is beyond me. A few hours reprieve from the kitchen is a big sigh of relief. I also get the chance to clean my apartment; cook dinner and what have you.

Upon leaving work, I decided to pass by the liquor store and bought a couple of bottles of Soju, a strong Korean spirit that I’ve learned to drink on cold, nasty weather like this one. It’s also cheaper compared with Canadian Whiskey or Vodka. Soon, I know, I’ll be cooking with them. But whatever, wine just doesn’t cut it for me anymore. I’ve also thought of drowning myself in Rum maybe over the holidays just to keep myself warm and upbeat every morning when I wake up to do the same bloody routine again until the 31st. Jamaican Rum’s alcohol level is at 63%, much stronger than Soju, and sure does provide that healthy kick and punch, if drank moderately.

In Manila, where the climate is as hot and humid as a car’s muffler, some kind of deep-fried spicy food with white vinegar and an ice cold San Miguel provides that comfort. In my case, I’d stick to those hot egg noodle soups topped with beef or chicken and paired with the best tea in Manila’s Chinatown. They are just perfect before or after my weekly Tai Chi classes, next to Dim sum (chicken feet!!). One of my favourites however, is the Chicken or Plain Congee. It’s just magic, and I never knew how it was so easy to prepare, until now. 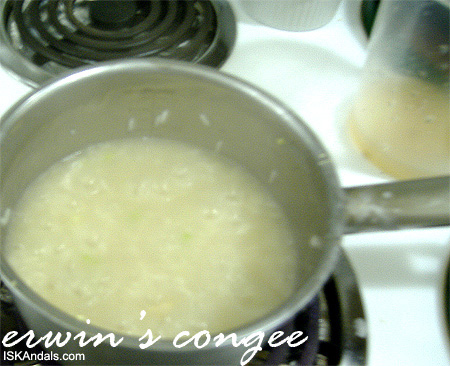 Procedure:
1. Allow the chicken stock to simmer in a small saucepan.
2. Add the rice & salt and stir vigorously until the right consistency is achieved.
3. Grate the ginger while the rice and stock are slowly thickening.
4. Chop some green onions and add to the mixture. Continue stirring.
5. Drizzle with Sesame Oil and, garnish with julienned green onions and ginger.

The secret in any good, flavourful cooking is a freshly made stock or broth. Bouillon cubes from the supermarket will just ruin the essence of Congee. This dish is so simple, but the broth I had previously stored made a whole lot of difference. When I cooked my first ever Congee, I had some left over broth from my White Chicken (another favourite of mine). I had to resort to Congee when my pantry was running low on processed food and aromatics (bacon, sausage, eggs, green peppers, onions) for breakfast. I didn’t have the time nor some cash to shop, and all I had was some freshly made chicken broth, chicken bones, rice, and of course salt. That night I decided to experiment with Congee and was quite jolly about the outcome. In the morning, I just added more chicken stock and salt to adjust the consistency and taste. This dish will further stand out if served with that long Chinese bread you see in many noodle houses. I had forgotten what it was called, but I saw a pack sold in the Asian grocery in the suburbs and bought one. It perfectly matched the Congee, and totally satisfied my hunger. This will also become more flavourful if a beaten egg is added at the last minute.

It’s another Christmas and from the looks of it, winter will be long, grim and surely white. In my case, 2007 was not exactly a milestone year, but a year of learning and realization. I bet 2008 will blow and howl like this winter storm, and tougher for many. I hope I can still continue and sustain my momentum in the future. No one knows what lies ahead, but bills still have to be paid, snow has to be shovelled, and no matter what, the world will tell us that it’s time to simplify things, as simple as cooking Congee.