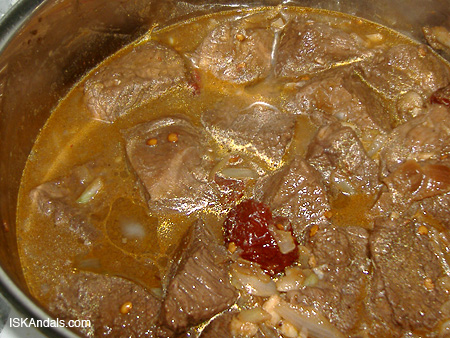 While growing up, I vividly remember eating adobo almost three times a week. It was the most common dish the household helpers cooked, even during special occasions. It was on the table day and night and as time passed, I promised myself I will never cook, try nor touch adobo ever; whether they’d be chicken and/or pork. And so I did.

That was about 10 years ago, I think, or maybe longer. Yes, it has been that long since. I was even so amazed to myself that I have lasted foregoing eating the dish. It went down to the bottom of my list on many traditional Filipino foods I have an urge to try (living in a far away land) and went even lower after cooking school. For most part, I also avoided eating pork except maybe for bacon or Chicharon. I haven’t lost the Filipino in me as of yet.

I also love cooking and experimenting classical and traditional dishes, whether they’d be Filipino or not, but this one was just not there. At any rate, after several thoughts, naps and wandering around this darn gray, cold city, I have finally decided to give it chance. Furthermore, my palate has entirely lost that adobo taste. From memory, I vaguely remember that it was marinated in vinegar, black peppercorns, bay leaf, onions and garlic and drenched in heavy chicken or pork fat after it was braised; however, I have never tried cooking it, ever in my entire lifetime! Moreover, I felt that the marinade used was really, really insipid. It sort of hadn’t had the proper mixture of sweetness, sourness, spiciness, saltiness and tartness I got used to tasting. However, this was from way, way back when generally I had neither idea on how to even chop nor saute ingredients accordingly.

After a few days of research and grocery shopping, I discovered other ingredients that I can infuse into the dish without losing its ‘Filipino’ identity. But beforehand, I had to prepare the broth and decide on what meat I’d use for the dish. Again, after several more days of thinking and analyzing, I decided on using beef stew cuts instead. I saw some recipes where ducks, rabbits and frogs’ legs where adobod, but opted to use beef for a simpler and more kitchen friendly approach to the dish. I will do the duck later. Ingredients for the Duck Adobo are still out of my reach (time), so to speak.

1. Bring the Beef Shank and cold water to a boil. Skim of scum as it rises.

2. Add other ingredients and simmer until the shanks are tender.

3. Remove the shanks from the pot and strain the broth. After straining, return the shanks back into the pot. Give it another boil.

4. Cut the potatoes, carrots and put them into the pot until tender. After several more minutes of cooking, add a stalk or two of celery and let it cook further.

1. Cut the Beef cuts in 1 inch cubes. Combine the marinating ingredients and adjust to taste.

2. Marinate the Beef cuts with the marinating liquid overnight to a day.

3. Saute onion, garlic and a piece or 2 of bay leaves in bacon fat. When aromatic, add the marinated beef cubes.

4. As it cooks, add the leftover marinade liquid into the pan with a little beef broth. Boil to simmer and shove the pan, covered, in a preheated oven at around 300degC-350degC. (Low & Slow & Depends on the oven).Â  Use a pressure cooker if necessary.

5. When cooked, the beef has to be so tender that it can be mashed with a fork or be ‘pulled’ common to many other braised meat dishes.

6. Reduce the Beef Adobo on the stove stop to achieve consistency (how wet or dry adobo is).

This dish has a more Mexican or Spanish approach to flavour. My style of cooking has somewhat been altered by wine and other influences. However, whose cooking isn’t? Each has his own name tagged into a certain dish. Anyway, the ingredients in the Chipotle in Adobo Sauce Can follow: Chipotle Peppers, Vinegar, Tomatoes, Onions, Sugar, Iodized Salt, Paprika, Soybean Oil and Spices.

The 1/2 can I used for the adobo sauce had a major spike, but the blend was very, very interestingly delicious. All the ingredients matched perfectly; giving a hint of each ingredient. It can match a bowl of hot steaming rice and beer anytime.

Leftovers can also be pan-fried, but that’s a whole new story and adventure altogether.