Erwin Ines is this blog’s regular Contributor. A Credit and Financial Analyst in Manila, Erwin migrated to Canada in 2003 and made a drastic career change a year and a half later. With his passion for food and love for cooking, he decided to take a Continuing Education Chef Training Course at George Brown College’s Chef School in Toronto.

Eggs are probably one of the most versatile ingredients next to the chicken. However, many in this world of ours relate eggs with breakfast and or with desserts. In my case, I’d prefer eggs with breakfast. I love breakfast and just couldn’t wait the next morning to prepare my Double Toasted Bagel Cream Cheese with Two Eggs Easy. Every now and then, I would change my bread to Rye or Whole Wheat and prepare a Western or Mushroom Omelette or Frittata. Last winter, I cooked four (4) pieces of crunchy bacon alongside this combination and mixed one crunchy slice with my omelette of the day. My morning was almost always so gratifying that I was in heaven on earth after taking such a huge meal. That meal would last me until about 3:00 P.M. before taking my quick leftover lunch. My early morning days-off would almost always turn into brunch. They were precious early mornings I cherished every week. I don’t get tired of cooking eggs. In most occasions, I’d flip the egg just to practice my speed and skill in tossing much like creating fire in the saute pan. That was my initial take on eggs.

At the moment, I am just totally confused on what to present for Lasang Pinoy so I resorted to writing this idea right away. I’m sure I won’t be presenting something “Pinoy” but maybe something more contemporary, western or classical as one might have expected as I myself have; living in the northeastern hemisphere in the western world. Initially, I wanted to combine eggs with potatoes and bread, but yet again I had to plan and to organize my ingredients to the last spec. I knew firsthand that would turn out something really flavourful, fulfilling and majestic, but yet again, time is not working for me. Spring is already here and summer is just lurking behind. It really gets out of hand during this once a year, 12-week phenomenon in Canadian summer; so with my schedule. It might get even longer and hotter due to global warming which only means more menacing work ahead. With this upcoming battle with summer, I had to devise a personal meal plan that worked. I’ve been avoiding processed food for health reasons and rice was the next best thing that was available in my pantry. I have been experimenting with rice lately cooking Chinese Congee with Julienned Green Onions (some say scallions) and Ginger. It’s fast and quick meal. It’s also a delicious and fulfilling fare similarly to my breakfast of toast and eggs. For LP17, I have decided to cook my version of Egg Fried Rice. It’s one way of cleaning up the fridge of leftovers before proceeding to Chinatown’s sweet market buys. 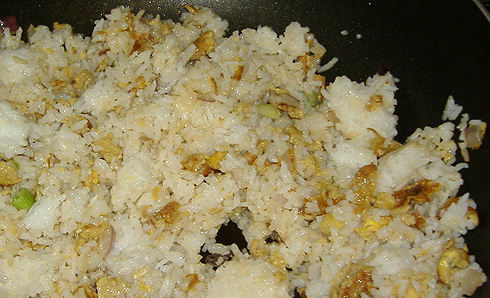 Who doesn’t like Rice? Pinoys are huge fans of rice. Filipinos almost often combine a bunch of fried garlic to make the never unforgettable and unforgiving ‘Garlic Rice’. It is a common staple for growing up Pinoys in College who love ‘Tapsilog’ or ‘Tosilog’ after a night out of beer and babes with friends. Who couldn’t forget those highway iffy joints? My friend used to call them ‘Aling Hepa’ for obvious reasons. They were cheap and satisfying after getting more or less broke painting the town red. They have never seemed to lose their magic when serving up Pinoy style fried eggs (brown, dry, broken & overcooked); a total opposite in the western society: white, runny, bright yellow & cooked as preferred.

Going back, the Yang Chow Fried Rice was my one of my first successful dish in my teens. It was one of my first love affairs with food. It was not exactly as pleasing as my first girlfriend, but it was as original and I was totally proud of it! When I was sixteen (16) years old, I ‘wokked’ my version of Yang Chow Fried Rice. I was whistling along my dad’s old turntable, chanting with the spins and scratches the vinyl makes, reminding me of my youthful days; while I concentrated on stirring the rice slowly burning and sticking down on an old generic pan seen in many Pinoy kitchens. Of course, I followed the recipe I learned on TV and from some worn out cookbooks my mother never cared to change for the household help nor looked at to detail. I was bored over the never ending summer heat in Manila and cooking fascinated me as Bruce Lee.

Much in the martial world, one learns as one ages. Cooking is no different. I’ve learned something mysterious by cooking fried rice. Tragically, I’d never cooked the same until twenty (20) or so years after. Hope I haven’t lost the tragedy and mystery of the recipe. 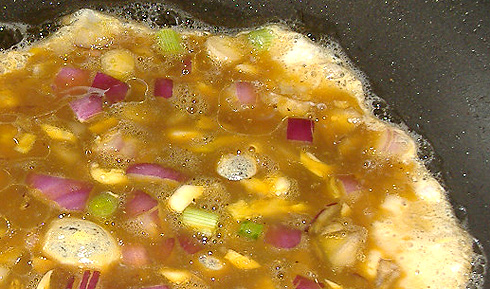