It has been about a year now since I have written a piece about food. I still consider myself a foodie, but circumstances led me to another path. Moreover, it’s fall/winter season again, and wine is being promoted heavily in liquor stores, alongside whiskey and rum. Yes, it’s that time of the year when these buddies of mine become a part of my recipes. Beer will always be there as it may seem, but they are secondary for now.

At any rate, I am writing about one of many Filipinos’ favourite recipes: The Kaldereta. Although I found the dish to be overwhelmingly appetizing & sumptuous, I discovered that it had lacked the bold flavours and depth of preparation to make it stand out amongst other stews. When I researched similar recipes, many of the ingredients I used were also included, but when I tried it, it had neither body nor the distinct whiffing aroma I had expected. Something was indeed lacking.

Braising is also one my favourite cooking methods. Despite the long hours of preparation, the stew becomes tastier and lovelier as it stays longer in the fridge. Furthermore, I have all the reasons to myself to drink wine or beer while cooking, which, in my notion, a necessity when preparing braised dishes (even frying). I also never understood why beer was never included as an integral ingredient in many Filipino homes despite its commonality as a food partner on the table as practiced in many provinces or even in the city itself. Wine is understandable. It’s a luxury in Manila unlike in other countries, where it is a simple table beverage. 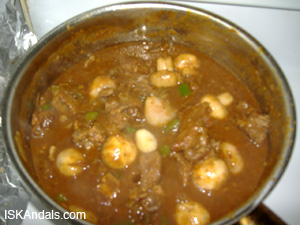 For this dish, I used veal stew cuts. Initially, I used lamb shoulder and the taste came out astonishingly magnificent. However, I sort of went overboard with my spices and ruined the dish. Moreover, lamb shoulder cuts are quite expensive. I would rather save that for a special occasion. I also discovered that veal is more tender and luscious compared with beef stew or shank, and it also had more marbling than many lean beef cuts for stewing. Marbling means additional flavour. Beef shank is typically used in many Pinoy restaurants, but braising time is twice as long. And usually, the shank is boiled with aromatics until tender to become Beef Nilaga, and some form of diluted tomato sauce is added in a separate pot using the same broth to make it Kaldereta. I would, however, prepare a special stock and a more potent tomato sauce using the same stock to make the stew a standout.

In my belief, the Kaldereta prepared the traditional Filipino way just doesn’t make the cut. I have tried several South Asian, Southeast Asian, Mediterranean and even American stews, and they were all filled with so many spices and aromatics I enjoyed eating them by themselves or with bread. It was already a meal in itself.

It took me about an hour or so to braise the veal on the stovetop, and about 45 minutes or so in the oven at 375degC. 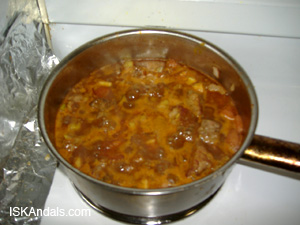 Procedure:
1. Cut the Veal Stew in 1 inch cubes, season with salt and ground black pepper and dust with flour. Cut the bacon in lardons.

2. In a stockpot, heat the olive oil and render the bacon until crispy. Remove the bacon from the pot and brown the veal cuts. Do this in stages to avoid overcrowding.

3. Remove the veal and set aside. On the same pot, sweat the Holy Trinity West followed by the Holy Trinity East. Dice the Green Bell Pepper, Onion and Celery and mince the Ginger and Garlic.

4. Add the tomato paste and stir until it darkens and the bottom of the pan a bit dry and sticky. Deglaze the pan with red wine. Return the veal back into the pot and add the Beef Stock. Boil to simmer and shove it in the oven.

6. Start adding the spices (except Nutmeg) and braise for an hour or so or until the veal becomes tender.

9. When the veal becomes tender, add the bacon, sauteed Green Bell Pepper, Shallots and Button Mushrooms. Season to taste and add the Nutmeg.

Most Kaldereta I know are seasoned with fish sauce. However, I found out that Filipino fish sauces are quite pungent and strong. It can sometimes overpower the whole dish to the point of ruining it. I would rather use Thai or Vietnamese fish sauces. Theirs are graded and refined like Olive oil. I also discovered them to be lighter and more aromatic than the Pinoy’s. Moreover, I would rather add fish sauce only upon serving, like lemon or lime in the end to make the dish shine or as a condiment with fresh or dried chillies.

Preparation of this dish is similar to the classic French stew called “Boeuf Bourguignonne”.

6 thoughts on “Ang Pagbabalik: The Kaldereta”