The air in Manila changes as September arrives. For many office workers in Makati, if one is lucky enough to land a stable job, mean the arrival of 13th and 14th month paychecks, providing a major sigh of relief for the coming yuletide season. That’s the meaning of September, as I would have recalled. It is the beginning of an undertaking between someone’s time, money and ideas and an absolute conjunction of the materialistic being and a sort of spiritualistic endeavor for many Filipinos. In short, it is a season of positive chaos in self. And it is only September.

The Christmas cheers in Manila are truly infectious. Christmas definitely kicks off in September and parties begin popping out by October. As I was growing up, I could vividly remember the dining area in my ancestral home filled with gifts from my mom and dad’s office mates. All sorts of food were available and they were in abundance. My breakfast was never short of spectacular with all the sweets and tarts overflowing right through the doorstep. My hot, steaming coffee found its perfect partners. And at that time, a leisurely conversation over at a chic coffee shop was not yet present. That moment in the past was manna from the heavens above, moments I cherished forever. It only meant that Mr. Christmas and Santa were really just peeping through the corner window or looking down the chimney (however absurd) ready to pounce on Christmas Eve.

Since food was readily available and abundant, the ever-traditional ‘Noche Buena’ on the 24rth and ‘Medya Noche’ on the 1st have been set. The household helpers really did not have to bother cooking anything at all. Everything was just warmed up after celebrating the mass and several bottles of sparkling wine were opened in time for gift giving and sharing. My Christmas was that stale, in terms of gargantuan and time-consuming food preparation required for the feast. Luckily, the weather was not freezing yet and if it were, my Christmas would have been dreary. I was in bed by 12:30 AM.

The Christmas season drastically changed for the better when I had celebrated it with my nephews. Kids, with all their innocence, definitely brought life to a boring situation. My family and I began celebrating Christmases outside of the country. These travels helped me discover more about food and how it was done and prepared in countless ways in lieu of the holidays. It was also at this time that I had begun to wonder why a feast like Christmas Eve was never, ever given such a priority while I was growing up. Learning to appreciate good things in life was also in absence. My appreciation for whatever good I may be receiving or would have received was that shallow. I was cloaked decrepitly in the past I hated and fortunately, my sister brought a seemingly festive occasion to life.

On one of these trips, I encountered the ever-popular Roasted Turkey. It was an American staple on Thanksgiving, which until now I could never comprehend why. I know Turkey slices for sandwiches, but a 5lb Roast Turkey served on a platter with all the juice and natural gravy flowing was just eye popping and mouth watering. It is at this time that I begin to learn and see more of what that is or that. Although I have only tasted a Whole Roasted Turkey a couple of times in my lifetime, the availability of broiler chickens as replacement for a quick comfy feast among friends on a holiday was good enough.

Chicken is relatively cheaper too and for many Filipinos, Chicken is never in short supply during the holidays. The following recipes are expected to be on the table: Tinola, Afritada, Adobo, and Prito. Over the last two decades, Lechon Manok also took a centre stage, a major role for many quick fix holiday get together and parties. It was along the way so to speak and at Php110.00 a pop, it was affordable for the hardworking middle-class. Maybe Lechon Manok has somewhat become the Pinoys version of the Roasted Turkey. Its juices also run through the meat at the bite and its golden to amber skin crackles and peels off altogether in one pull. Some dark portions of the caramelized chicken skin that have been roasted over the pit are also sweet and savoury, but never overcooked or burned. It was a sumptuous meal much appreciated by many much so because it also perfectly matched another popular Filipino beverage: San Miguel Beer. 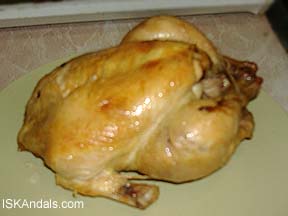 To commemorate this festive event, I have decided to recreate this moment with my somewhat Fil-Canadian Lechon Manok. It is a very simple recipe that accentuates the taste of a whole fryer. The golden brown and crispy chicken skin when cooked and the juice that oozes and flows from the chicken extremities to the chest match any cheap table wine.

I have never stopped loving Chicken too, much like my first girlfriend whom I’ve never stopped loving, tasting and kissing 10 years ago. When I was still in my teens, I would request the household help to make Chicken Inasal and Chicken BBQ. When I started cooking, I experimented with a recipe called Pinaupong Manok (Smoked Chicken), which I saw on TV. I ended up finishing the whole chicken in one sitting. I love cooking using the oven. Basically, I (or management) have a reason to do more things while waiting for an hour or so over a sumptuous dish being cooked over an expected longer period of time-multi-tasked eh, as so common now in many kitchens nowadays. 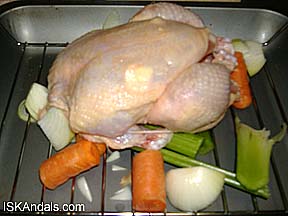 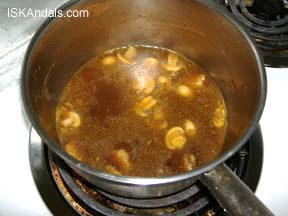 Easy Steps:
1. Pre-heat the oven at 400degC-450degC (depends on the oven).
2. Warm up the Chicken Stock.
3. Truss the chicken.
4. Rub the chicken with salt, pepper, oil and butter. Make sure that the butter and oil are also rubbed underneath the skin
5. Insert the sachet into the chicken cavity. Use fresh herbs if available.
6. Place the chicken on a roasting pan and scatter the mirepoix around the chicken.
7. Roast the chicken for about an hour. Turn the chicken midway if necessary.
8. Remove the chicken from the rack. Cover with foil and let it rest for 15 minutes. If the juices are dripping from the cavities and the legs are loose, it is fully roasted. Based on Ontario standards, the thickest part of the Chicken should be at 180degC.
9. Turn the stovetop to high (remove excess oil while heating the pan up) and start deglazing the roasting pan first with White wine and followed by the Chicken Stock. Once it has been deglazed, sieve and transfer the gravy into a saucepan. Reduce to half and season to taste.
10. Serve the chicken on a platter and garnish with fresh herbs.
11. Carve. Share. Smile.

The expanding and growing Filipino population makes food preparation even more challenging. Resources are shared with many, not exactly to a few anymore and with more battles in life, at lesser resources and shorter time, Christmas for Filipinos, (in my case) has become some sort of an exercise. The festive and spiritual aspects I was ingrained into by my strong Catholic upbringing have shunned and covered the tribulation and the struggle of the ordinary Pinoy. It is a temporary recluse of happiness, I think. It is not a permanent mark or tattoo engraved on the skin for a lifetime. What has turned up 20 years ago has crashed down to demise today.

Let the spirit of this temporary sojourn live up to food. Food will always be there and food keeps the Pinoy smiling and celebrating. The Pinoy smile is infectious too; much like I guess the Christmas season I celebrated while I was a young boy in deep agony over self-satisfaction and gratification.