I stopped eating fastfood when I discovered how French fries were deep-fried in oil about a month old. The fries turned out so dark and soggy and was totally disgusting despite the high temperature it was deep fried upon. And, the owner still had the guts to serve it to customers. After that experience, I stayed away from most small and even bigger hamburger joints and food chains that had served French fries on their menu and stuck with chains that I felt and knew that changed and cleaned their deep-fat fryer more frequently; or at least strained the oil every so often before re-using it for another round.

I became more aware of what I put in my mouth and specifically where they came from and from where they were bought. Despite being so tired and hungry the entire day, I would still force myself to cook something thatâ€™s nowhere fastfood style. Moreover, I had totally eliminated Pop in my beverage list. I would usually buy a liter or two during the first few years when I arrived here, but since then, had completely taken them off my grocery list. Honestly, I do feel like 21 again after giving that up, and I can catch-up with other cooks ten years younger than I am who had smoked and drank Pop daily. I couldnâ€™t catch up with cooks that do weed though. Their endurance is just tremendous during peak hours of the day.

My typical fastfood would usually be a pasta dish of some sort, and of all my old time favourites is Spaghetti in Tomato Sauce. This spaghetti though isnâ€™t sweet with hotdogs like Jollibeeâ€™s, my sincerest apologies folks. Iâ€™ve avoided eating hotdogs as well for personal reasons. This dish leans on the classic preparation of Spaghetti. It is really very simple, but the procedure in making the Tomato Sauce can be very time consuming if itâ€™s done in a commercial scale. The final product also requires a combination of sautÃ©ing and simmering for hours end until the sauce reduces and thickens to the right consistency. Thereâ€™s always a shortcut to doing it, but it would still require some period of time to prepare it properly. I would usually make a big batch and freeze the leftover for some other day for some other pasta dishes. I know I could still use it for many pinoy dishes like Kaldereta and Afritada and many soup dishes requiring tomato sauce or tomato substitute. Itâ€™s so versatile, and it stays good forever as long as itâ€™s in a frozen state. Mine doesnâ€™t last long though. I keep it in the freezer on the third day. 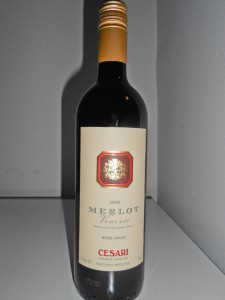 My beverage of choice when I prepare and eat pasta would almost always be a bottle of red wine. I should always have a bottle of cheap Italian Red with me when I start making the sauce. My definition of â€˜cheapâ€™ is a bottle under $10. Unfortunately, the liquor store here in Toronto doesnâ€™t sell a 2 Euro bottle of wine like those found in Italy. I donâ€™t go beyond that price, and you can call me cheap, by all means. Thatâ€™s an accepted fact; maybe one of the many reasons why my ex-wife left me. Anyway, Iâ€™m quite extravagant when Iâ€™m out on a date or with my buddies, but thatâ€™s an entirely different story. I know I have to tell that soon, somehow, through another food experience, but so far, that has not occurred yet; maybe in due time. Anyway, I just canâ€™t do away without wine when I cook pasta. 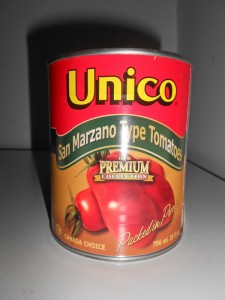 I also use a San Marzano type canned tomatoes. I noticed the big difference from regular canned plum or crushed tomatoes from this kind. It has basil infused in the can itself making it more aromatic and flavourful when simmered for a long time. As for the pasta, I would usually buy some whole wheat spaghetti, but if the regular ones are on sale, Iâ€™d take a bunch for my pantry. I would usually make my sauce a bit garlicky from the usual recipe of onions, celery and carrots, and as much as possible, not as thick as many pinoys are so used to having. As for the cheese, instead of the usual, boring grated Parmesan, I would go for a block of the following cheese: Parmigiano Reggiano, Romano, Asiago or Mozzarella. I would combine any two of the first three. However, Iâ€™d leave Mozzarella on its own. When Mozza mixes in with the pasta, the pasta dish explodes! Mozza just melts instantaneously when itâ€™s heated up. There are some cheese stores in the Chinatown Area that sells small blocks at around $5 each and the taste is almost always far better than those found in many grocery shelves. However, due to the limited time I have had lately, I bought a ready grated container of Romano found at my nearest grocer and used that to mix into my pasta and to top off before serving. 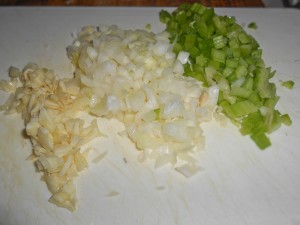 Tomato Sauce:
â€¢ In the first stockpot, sautÃ© the onion and celery. As they soften and become aromatic, add in the garlic. Keep sautÃ©ing until everything caramelizes without burning or browning the garlic. 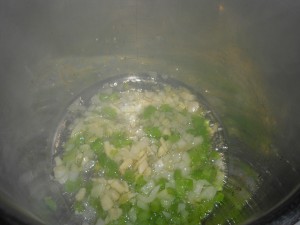 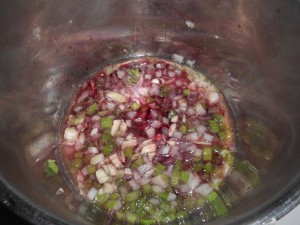 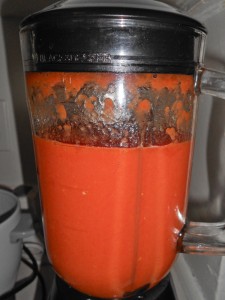 â€¢ Add in the dried herbs and bay leaves and continue stirring.
â€¢ Pour some chicken broth and let it boil to simmer until it reduces to the right consistency. Season to taste and donâ€™t forget to discard the bayleaves after. 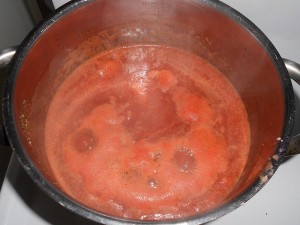 Pasta:
â€¢ Once the water boils in the other pot, drop the pasta according to the instructions in the box.
â€¢ Pull out and set aside in a strainer. Save some of the pasta water for sautÃ©ing. If the noodles dry out, sprinkle some olive oil and mix gently. Donâ€™t run it in cold water. 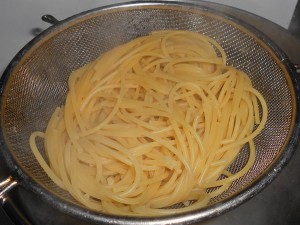 Sauteing:
â€¢ Heat a sautÃ© pan and start sautÃ©ing the onions, celery and garlic. Deglaze it again with the red wine, and using a ladle, scoop some of the tomato sauce into the pan until the noodles absorb the right amount of sauce. Add some of the pasta water that was set aside and continue sautÃ©ing. Squeeze some lemon juice and season to taste. Chop some Italian Parsley and add them into the pan. Add the chosen cheese and sautÃ© a little further. 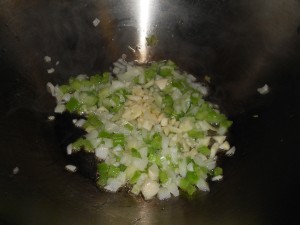 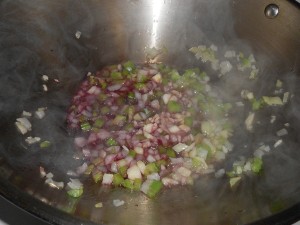 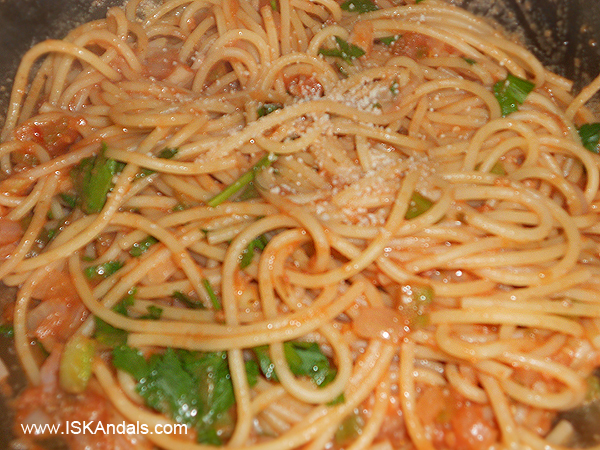 â€¢ Serve it on a plate. Garnish with the fresh herbs and grated cheese. 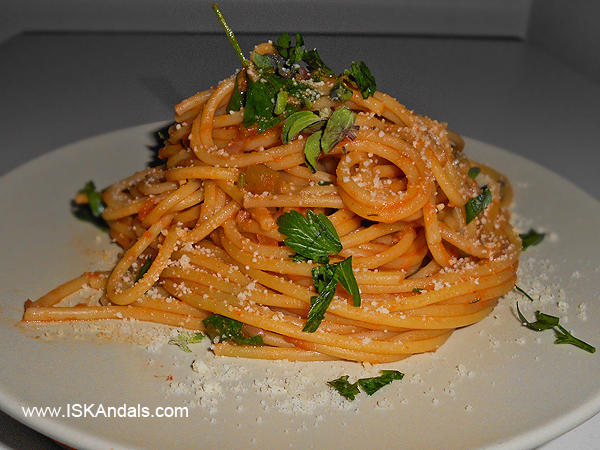 Herbs:
â€¢ Choose between Italian Parsley or Fresh Oregano when finishing the pasta. Each has its own very distinct flavours apart from each other. I chose Italian Parsley for this dish.

I just recently met someone working in Riyadh, KSA who doesnâ€™t eat steak or lamb. I am guessing her line of work is preventing her from doing so. She’s missing so much! She does eat pork though, but pork is disallowed and forbidden in that side of the world-too bad. I really don’t know what she has been eating there if meat isn’t on her list. Anyway, I had the opportunity to chat with her the other day and she told me that her favourite dish is pasta. This might be very appropriate for her. I also had the same thing in mind after seeing several pasta dishes from the previous FTF. That also got me going and made me miss doing Tomato Sauce from scratch. It has been a long time since I made a full batch. I also had a can of San Marzano Tomatoes sitting in my cupboard for a couple of months now, and never had a chance to make the sauce since the weather has warmed up a notch a higher from the usual. And when the weather heats up, I usually go on overdrive at work. I also needed the sauce for a â€˜fastfoodâ€™mealâ€™ now that I donâ€™t have a full day-off for the next couple of weeks.